Thanks to “Dark skies”

Thanks to 17,000 volunteers Cities at Night has classified an impressive 130,000 ISS pictures so far using the Dark Skies application. View this map to see all of the photographs that have been classified as depicting cities.

You can choose any of these images from the map and try to identify the city with Lost at night application.

Thanks to “Lost at night”

Although a substantial amount of photographs have now been classified as depicting cities, we still need to identify which cities they are. The Lost at Night application allows users to do just that. By consulting the image metadata we are able to know where the ISS was located approximately at the time a photograph was taken. To be precise; cities depicted in the ISS photographs should be in a 500 km area of the ISS nadir. With these approximations our volunteers have so far located more than 2500 images: City gallery

Now that they have been identified; choose any of the images below and try to geo-reference them with the help of the Night Cities application. 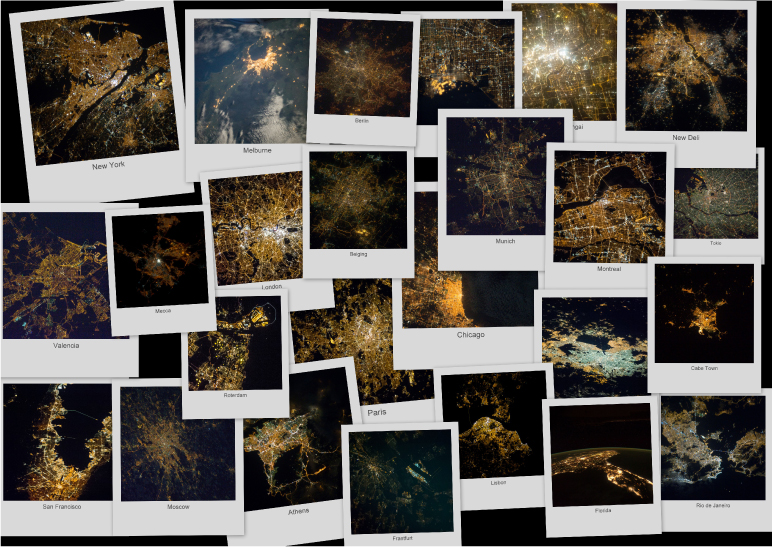 Thanks to “Night cities”

Once we know the city location, we need a geo-referencing process. This will allow us to link the identified photographs to a physical map. We currently have more than 1000 geo-referenced images layered on top of the Cities at Night Map:

Unfortunately Google Maps Engine stopped working since January 2016 so the map is unavailable at the moment.

Below you can see examples of two maps made partly of black and white photographs (which is the real data used for the Black Marble Map) and partly of coloured photographs (the data from the ISS). Although this example is made in low resolution it is worthwhile to view these maps to obtain an idea of the potential that comes with having data available in colour instead of in black and white.